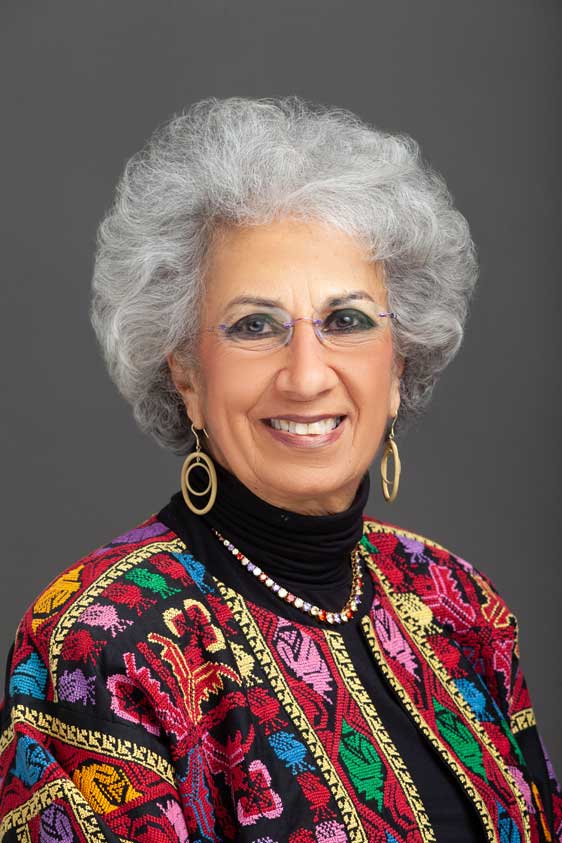 Over the course of more than five decades, Dr. Afaf Ibrahim Meleis has demonstrated a profound passion for pushing the boundaries of nursing science, cultivating the next generation of health care leaders and enriching women’s health knowledge and agenda. As the vibrant and forward-thinking Dean of the University of Pennsylvania’s, #1 in the World, School of Nursing (2002-2014), she was known as the “Energizer Dean,” a nickname coined in her 2009 Pennsylvania Gazette profile, which conveyed her can-do attitude and approach to her life’s work. Her deanship followed 34 years professorship at UCSF.

A leading expert in global health, immigrant and women’s health, Dr. Meleis has dedicated her career to ensuring vulnerable populations are given a voice, particularly women who are burdened by societal inequities, multiplicity of roles, differential compensation and the gender divide. She used this knowledge to redefine women’s work, health and contributions and to develop Transitions Theory, which is translated and used globally in education, policy, research and evidence-based practice.

In addition to her research and writings on these topics, and on topics related to culturally competent practice, interprofessional education and the epistemological analysis of the discipline of nursing (over 200 publications), her impact on advancing global health is evident through her empowering mentorship of 100’s of nursing scholars, scientists, clinicians, administrators and students around the world. Her scholarly contributions have informed generations of nurses and midwives, influencing their education, practice and research programs. Through her presence, writings, consultations and key note addresses, she amplified, honored and celebrated the voices and the pivotal roles of nurses, midwives and women in health care systems in particular, and in societies in general. She has also done that through leadership roles on boards, in organizations and in foundations, such as, CARE, Global Health Council, Macy, Robert Wood Johnson, and International Council on Women’s Health Issues (ICOWHI). Her presidency of the ICOWHI brought world leaders to form partnerships which inspired impactful scholarship to improve the lives of women.

To inform and transform, she led meetings for legislators, researchers, administrators and clinicians in Africa, the Middle East, Cuba, and Latin America. She also chaired commissions and forums in such organizations as the National Academy of Medicine and the American Academy of Nursing which resulted in educational policies adopted by universities and health care institutions.

She is continuing to be invited globally to speak, consult, and inform healthcare and social policies, and her leadership is currently evident in the many boards and committees on which she actively participates in, including her current roles as a board trustee of Aga Khan University, (6 global universities and 4 hospitals) and a board trustee of The Buck Institute for Research on Aging in Marin County. Her books continue to be used nationally and internationally, chief among them, Transitions Theory: Middle Range and Situation Specific Theories in Research and Practice and six editions of the ground-breaking Theoretical Nursing: Development and Progress. Her co-edited book, Women’s Health and the World’s Cities, innovatively examines the relationship between global urbanization and women’s health and is just one example of her ground-breaking and far-reaching research. This book continues to be widely disseminated through international networks, and conferences, and in turn continues to inspire collaborations in the design of urban areas that reflect women’s roles and needs. She also co-chaired the Harvard-Penn-Lancet Commission on Women and Health, the results of which were published in a full Lancet issue. It provided an innovative framework to revolutionize how women’s health is redefined from a focus on reproduction to a focus on production, and encompasses the fluence of global and local socio-cultural transitions on women’s roles and life styles throughout their life cycle from in utero to death. In general, the frameworks she developed with her collaborates are continuing to inform changes, albeit gradually and sometimes indirectly, in health care curriculae, as well as, in the delivery of health care for women.

Dr. Meleis was inducted, as a fellow, to the National Academy of Medicine, National Academy of Nursing, and the National League of Nursing Academy of Nursing Education. She is also the recipient of numerous honors and awards, as well as honorary professorships and doctorates. Among them is an Honorary Doctorate of Medicine from Linköping University, Sweden; a Doctor Honoris Causa from the University of Alicante, Spain; an honorary Doctorate in service from the University of Montreal, the distinguished Honorary Citizenship of Oporto, Portugal and honorary Professorships from Peru, Australia and Hong Kong. She was also designated by the American Academy of Nursing as a” Living Legend” and received the Sigma Theta Tau International Nell J. Watts Lifetime Achievement in Nursing Award. Most recently, she was honored with the 2018 Princess Srinagarindra Award in Thailand for her global impact on health care.

Born in Alexandria, Egypt, where she developed her passion for the discipline of Nursing (B.S. from the University of Alexandria in 1962) and where she met and got engaged to her husband of 53 years, Mahmoud Meleis, Ph.D. He joined her in Los Angeles, where they got married and where they both received their graduate education from UCLA, he in Nuclear Engineer (Ph.D. 1971), and she in Medical Sociology and Social Psychology (Ph.D. 1968). They resided and raised their two sons Waleed and Sherief in Marin County since 1971.

They are now learning about grandparenting their wonderful and lively 7 grand-children, some of whom live in Mill Valley and others live in Boston.