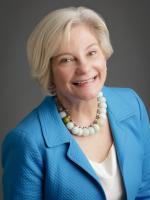 Barbara Morrison has devoted her career to advancing the financial security of Bay Area small businesses while simultaneously building her own business, TMC Financing, which provides financing for small business owners to purchase commercial real estate through the U.S. Small Business Administration’s 504 loan program. The economic impacts of her efforts include helping nearly 5,000 businesses secure their future by owning their own buildings. As a result, they have been able to grow and create or retain nearly 50,000 jobs, roughly equal to the population of San Rafael, Marin County’s largest city.

Barbara began her career at a time when women were relatively uncommon in financial services. While vacationing in San Francisco, she walked into the Paine Webber office to introduce herself to the operations manager. He offered a job and she went back home to New England, packed her bags and never looked back. She started as a sales assistant, but her boss noticed her potential and offered her the opportunity to study for the broker license exam, all while knowing full well Paine Webber would never hire a female broker. Once she became a licensed broker, Barbara landed a position on the trading desk of a smaller, regional firm. When she asked for business cards, the officer manager matter-of-factly explained, “We don’t give girls business cards.” They had never had a female broker before. She ultimately got her business cards, but had to compromise on the lobby directory listing and was identified only as B. Morrison.

A child of the sixties, Barbara knew she wanted a career that would make an impact, one that would leave the world better in some way. She left the trading desk and found an unpaid internship with the San Francisco Mayor’s Office of Economic Development. In the late 1970s, the focus of public policy was shifting to economic development and job creation, and small businesses were heralded as the engine of the economy. Barbara was chosen to implement the city’s first SBA loan program and was subsequently promoted to the office’s deputy director during the Feinstein administration. Barbara had found her calling: promoting the success and growth of small businesses so that they can generate jobs and create economic opportunity. But, after two-and-a-half years, she knew that she had to leave the glacial pace of local government behind, and took another leap into the unknown.

The SBA had recently expanded the economic development program designed to provide affordable real estate financing for growing small businesses. Barbara saw an opportunity to utilize the SBA 504 program to help small businesses without depending on the support of a government paycheck. In 1981, she created what would become TMC, a true public-private partnership: a nonprofit-certified development company that partners with banks to provide SBA 504 loans to small businesses. Since then, Barbara has built TMC into the largest SBA 504 lender in Northern California and the number two 504 lender in the nation. Over the past thirty-five years, TMC has provided more than $8 billion in financing in California and Nevada. In Marin County alone, TMC has provided $80 million in total project financing to fifty businesses, creating or retaining more than 1,000 jobs.

While TMC helps companies grow and expand, Barbara felt there was still an unmet need for entrepreneurial education. In the early 1980s, college-level entrepreneurship programs had not yet been established and the MBA curriculum was geared toward corporate careers. As a founding board member of the Renaissance Entrepreneur Center, Barbara helped create a fourteen-week program designed specifically for budding entrepreneurs. Today, The Ren Center strengthens our communities through the creation of sustainable new businesses, new jobs and promotion of financial self-sufficiency by empowering and increasing the entrepreneurial capabilities of socially and economically diverse women and men throughout the Bay Area.

In 1999, Barbara took her efforts to help entrepreneurs a step further by combining financial assistance and education. She cofounded Working Solutions, an innovative nonprofit microlender that uniquely offers businesses five years of consulting assistance, as well as a small business loan. The combination of financing and consulting is the key to the program’s success, ensuring that entrepreneurs get off to a good start. Working Solutions focuses on providing services to low-income, female and minority business owners who lack access to conventional financing. Since its inception, Working Solutions has made 344 loans valued at $8.3 million to under-resourced business owners in the San Francisco Bay Area. These microbusinesses have gone on to leverage an additional $9 million in conventional financing after graduating from the Working Solutions loan portfolio. In Marin, Working Solutions has helped thirty-eight businesses create 110 jobs with $912,000 in funding through 2015. Seventy-one percent of the borrowers were low- to moderate-income; sixty-three percent were women and thirty-seven percent were minority. Overall, Working Solutions has educated nearly 13,000 entrepreneurs, providing technical assistance, mentor connections and pro bono legal services.

As board president, Barbara has been instrumental in guiding Working Solutions’ growth from a start-up idea with one employee to a mature economic development organization with thirteen employees, an annual budget of $3 million and assets of more than $5 million. Recognizing the effectiveness of the Working Solutions model, the City of San Francisco selected Working Solutions to administer its business lending capital through a revolving loan fund. With added investment from banks, the SBA and the U.S. Department of the Treasury, Working Solutions’ total Bay Area loan fund continues to grow, reaching $8 million in lending capital targeted at low- and moderate-income Bay Area entrepreneurs.

Barbara is particularly invested in the Marin community, having served on the city council and as mayor of the City of Belvedere for two terms. She has also been heavily involved in the Belvedere Tiburon Library, serving as the Belvedere representative to the Belvedere Tiburon Library Agency and as a former board member of the Library Foundation. She also founded and served as past president of Bookmarks, a volunteer organization that raises money for children’s library programs. Barbara is also a former Advisory Trustee of the Belvedere Community Foundation and a former board member of The Buck Institute for Research on Aging.

Among her many professional affiliations, Barbara is a former board member of the Harvard Kennedy School Women’s Leadership Board. Barbara is a dedicated small-business owner, civic leader and community economic development advocate who continually finds new ways to advocate for women and small-business owners. Through her personal contributions of time, money and extensive pro bono support, she has directly affected the lives of thousands of small business owners in the Bay Area and beyond.