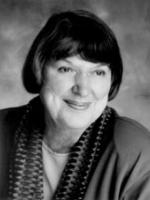 From her first job as program director of a ‘start-up’ radio station called KTIM, to her work as an editor of the China Daily in Beijing, Beth Ashley has had a rich and varied career.

Ms. Ashley has reflected Marin County’s history to new readers and captured warm reminiscences for its long-time residents. She has made us look at our responses to important issues by revealing her own thoughts and feelings to us. She has helped everyone in Marin to grow and become more aware of who we are and where we are.

During the 1950s, she was one of two women news editors on daily newspapers in California. During that period, she was elected President of the United Press Editor’s Association of Northern California. She had job offers from the two major newspapers in San Francisco, but turned them down because she preferred to work in Marin where she could be close to her children and be part of the local community.

Ms. Ashley has had her own public relations firm, traveled the world and written about it, captured the essence of Marin in her legendary columns and in her most recent book, “MARIN.” She also worked in Moscow in 1990 on Komsomolskaya Pravda and on USA Today in Washington in 1996. She is a role model for success through hard work, perseverance, kindness and compassion.