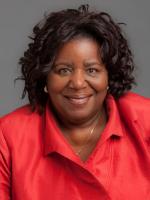 Bettie Hodges is an activist, philanthropic professional, educator and community development specialist whose professional career spans more than thirty years. Ms. Hodges is a native Marinite whose parents, Ruth and Charles, were part of the Great Migration of Blacks who fled the South in search of freedom and opportunity in the North and West. Bettie’s lifelong residence in Marin City and her long-term commitment to social justice and civic responsibility reflect the hopes, dreams and mores that were fostered in a home environment filled with parental love, nurturing and great expectations. Her upbringing is mirrored in the work in which she has chosen to dedicate her energies.

Bettie Hodges was founder and Interim Executive Director of the Marin City Community Development Corporation (MCCDC), the organization that some twenty years later assumed responsibility for the redevelopment of Marin City and construction the Gateway Shopping Center. Ms. Hodges was prepared to meet the many challenges of co-founding this MCCDC following conferment of her undergraduate and graduate education from the University of California, Berkeley. This local leadership role led to her being awarded fellowships to the Massachusetts Institute of Technology and the Congressional Black Caucus Foundation in Washington, D.C. where she served as editor of the Congressional Black Caucus magazine, Point of View, and worked as staff to the Employment and Housing Subcommittee of Government Operations chaired by Congressman Barney Frank.

In 1987, Bettie returned home to her beloved Marin City prepared to lend her educational and practical experience gained on the national arena to elevate her local community. As Program Officer for Housing and Community Development at the Marin Community Foundation, Ms. Hodges’s philanthropic and community development expertise were instrumental in the development of projects that increased Marin County’s low- and moderate-income housing stock by over 1,000 housing units. In Marin City, Bettie successfully lobbied for the Foundation’s multi-million dollar underwriting of the Gateway Shopping Center, including 198 rental units and forty-two single-family homes. Elsewhere in the County, Bettie’s funding recommendations led to the development of Hamilton, as well as houseboat communities in Southern Marin. Her grants leadership was responsible for the creation of Marin Grassroots Leadership Network, the Thriving Families Initiative and a $10 million affordable housing trust fund.

In 2006 Ms. Hodges chartered The Hannah Project Partnership, a 501(c)(3) charitable organization that provides academic and cultural educational programs to Marin County at-risk youth. As Executive Director, Bettie Hodges has secured grant and donation support that has allowed her to provide more than $320,000 in college scholarships to Marin City students, the majority of whom are the first in their families to attend college. Ten scholars have graduated college since the inception of the Dream Keeper Scholarship Program in 2008, and the Hannah Project is currently providing financial support and guidance to twenty-eight local young people enrolled in post-secondary institutions across the United States. In addition, the Hannah Project Partnership offers weekly tutorial assistance to middle and high school students, as well as a college preparatory program for high school seniors.

In 2011, recognizing the lack of a culturally nurturing vehicle for the arts within the environs of Marin City, Bettie established the Hannah Gallery. Its offering of visual and performance art by professional and amateur artists, with an emphasis on Afrocentric and multi-cultural expression, expand the cultural variety in the County. Youth and family programming provided by the Hannah Gallery includes an Open Art Studio for children, as well as an Artist in Residence who instructs dance, yoga and drama classes. In addition to support of the arts, the gallery provides a southern Marin meeting space for dialogue and educational exchange by such varied groups as Marin County Interfaith Council, Marin Grassroots Leadership Network, Sausalito Marin City School District and the Restorative Justice Committee.

Of her life, Bettie says, “I spent all of my early life in Marin City – a tiny community that was locked in a perpetual struggle for its identity and its right to exist – a community where everyone was so familiar with our neighbors, we never felt the need to lock our doors – where summers were spent sliding down hills on cardboard and trying to avoid the poison oak that would inevitably invade and interrupt our playtime… From these insulated confines, I received an exceptional education both at school and at home. My father, a member of Harry Bridges’s Longshoremen Union, taught me about the plight of workers, and through my mother I became familiar with CORE and SNCC and the civil rights struggle in the South. I watched children younger than me face down water hoses, bulldogs, and bombs – fighting for equality and paving the way for their elders to enjoy the freedoms of the 13th, 14th and 15th amendments… I feel a responsibility to give back what was so graciously given to me. I want the youth that we work with to not only take pride in who they are, but to embrace the legacy of excellence that our fore parents left for us.”

Ms. Hodges attributes her commitment to empowerment and activism to the aspirations of her parents and a generation of African Americans who would not be denied the freedoms that were rightly theirs. “Coming of age in the sixties,” she reflects, “I learned to believe in the resilience of grassroots leaders who taught me the truth of the Margaret Meade quotation, ‘Never doubt that a small group of thoughtful, committed citizens can change the world.’” “God enriched me with an amazing collective of supportive friends and family who were always willing to hold the dream and make the journey.”

Bettie is married to Terry Shelmire, with whom she shares a deep faith and dedication to the disenfranchised. Together with her sisters Yvonne Jenkins and Felisa Pinson, they celebrate their mother Ruth who turns ninety-one on March 27th – the day of Bettie’s induction.