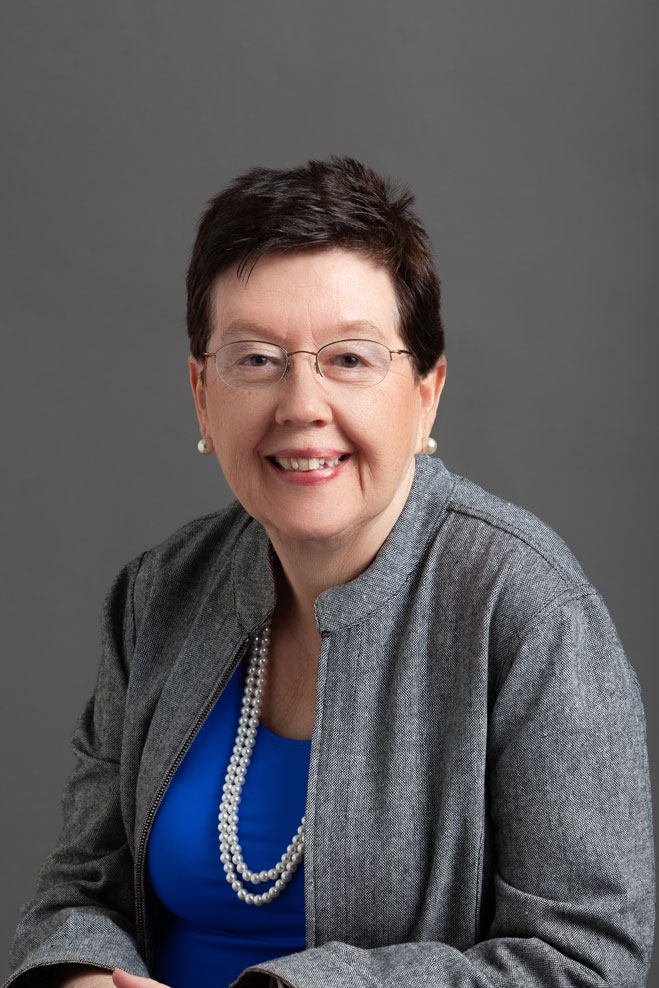 Cherie Sorokin never expected to climb the corporate ladder.  Yet, by 1999 she was a Group Executive Vice President and Corporate Secretary of one of the major financial institutions in the U.S., and well-known in the corporate world for her expertise and leadership in corporate governance.

At Bank of America Cherie also began to put her leadership skills and governance expertise to work in the nonprofit arena. She continued this work after leaving the corporate world in 1999, and also began consulting on governance at both for-profit and nonprofit organizations, in addition to co-authoring a book, a legal portfolio and numerous articles on the importance of corporate governance to organizational strength and sustainability.  She is the recipient of the Bracebridge H. Young Award from the Society for Corporate Governance in recognition of her extraordinary contributions to the organization and the governance profession.

Cherie has devoted countless hours to leadership in multiple nonprofits, sharing her governance expertise, and using her networking and mentoring skills to help make a difference in the community at large.  She has been or currently serves as a board member of the Society for Corporate Governance; Pocket Opera; The American Conservatory Theater (President); AAUW Marin (President); AAUW (national board secretary); The Dominican OLLI Advisory Board; Marin Thetas (Treasurer); and Marin Villages (President).  Cherie also leads a weekly Spanish conversation group at the Tiburon Library and is a member of Wednesday Morning Dialogue, the Dominican Women, Leadership and Philanthropy Council, and Sunset Rotary.

Growing up in the 50s and 60s, marriage and possibly a teaching or nursing career were the expected paths for women.  But thanks to many influencers and mentors, good luck, and just plain hard work, Cherie’s path diverged from “the expected” into law and then business.

Cherie’s parents, Floyd and Holly Arpan, imbued her and her younger brothers Jeff and Randy with a love of learning, an openness to ideas, culture and international travel, and an appreciation for independence, persistence, and hard work, whatever the goal. Indefatigable readers and writers, Cherie’s parents also gave her a love of reading and a passion for clear exposition. Their home was filled with visitors from around the world as Cherie’s father, a professor of journalism at Northwestern and Indiana, also headed a State Department program to introduce international journalists to the principles and responsibilities of America’s free press.  Cherie’s mom was a quiet but determined feminist and an active member of AAUW, an organization dedicated to advancing equity for women.  Surrounded by her mom’s AAUW friends as she grew up, Cherie often says she was raised by AAUW because of the influence of those educated, independent AAUW women. Life at home wasn’t all dedication and seriousness, though. Both parents had a delightful sense of humor (and a particular fondness for puns) which they passed along to all three of their children.

Theater has been another major influence in Cherie’s life, starting with acting in an elementary school creative dramatics program and continuing through high school with roles in dramas, comedies and musicals.  Cherie found acting incredibly freeing and fun—a way to overcome shyness and insecurity during those growing up years, and giving her the confidence to learn to speak in public without fear.

As a junior in High School Cherie competed for and won the opportunity to attend a Spanish language program in Oaxaca, Mexico.  It was the beginning of a life-long love of Spanish and Latin culture.  It also led to a Indiana University scholarship to study Spanish and French and obtain her teacher’s license. In a hurry to “get on with life,” Cherie graduated in three years (with highest distinction), married Chris Knowles, gave birth to their son David, and embarked on a career as Spanish teacher, while simultaneously studying for her Master’s degree in education.  Moving with her husband as his career took him across country and back, Cherie taught Spanish first at the university level, then in an elementary school program, and finally at the high school and junior high level.  As her husband’s career flourished she learned to balance the role of corporate wife with her own teaching career and role as the mother of a growing child.

Although she won awards for her teaching prowess, Cherie wasn’t entirely satisfied in the role.  Inspired, in part, by the growing feminist movement and the increasing number of women moving into careers traditionally held by men, Cherie decided to leave teaching and study law at Northwestern University.  While in law school, she soon discovered her teaching and writing skills were easily adapted to the task of explaining complicated legal issues to non-lawyers and her Spanish language skills offered the possibility of work and international travel with certain legal firms and multinational corporations. Getting hired was not easy though.  Sex discrimination was rampant in law firms and in many corporate environments in the 70s and 80s.

Fortunately, about the time she graduated (Order of the Coif), Bank of America opened a small Chicago “loan production” office (no interstate branching back then) and was looking for an attorney to work on major corporate lending and leasing transactions.  It was a steep learning curve for someone fresh out of law school, but exhilarating to be given “sink or swim” responsibility, including being sent to Mexico and Venezuela to work on transactions in those countries.

An unexpected and traumatic divorce in the early 80s, led to Cherie’s move to San Francisco.  Bank of America was eagerly looking for “promotable women” then as it was under a consent decree for not having enough women managers.  But being part of the effort to change the “old boy” culture wasn’t easy.  Significant resistance by a senior business executive in Mexico led to her being denied the leadership position in the Mexico legal office.  Some senior bankers and lawyers in the U.S. also needed convincing that a woman could play a leadership role in negotiations, or product design or the creation of new programs at the cutting-edge of regulatory change.  Good humor and a sense of perspective helped keep Cherie sane during those years, and eventually her persistence and quiet determination won out.  Her reputation as a “lawyer you could talk to and work with” grew and she was promoted to senior positions in the Legal Department and then asked to interview for the Corporate Secretary position.

The Corporate Secretary role is a corporate function involving high-level service to many constituencies (board of directors, senior management, individual shareholders, institutional investors, etc.) as well as oversight of a wide variety of corporate functions needed for the smooth functioning of any corporate entity.  Because legal issues are integral to the function, the position is most often held by a senior lawyer. The role also requires someone who can engender the trust and confidence of high-powered directors and executives but also have the courage to “speak truth to power” when needed.

In 1986, there were very few women in the role of Corporate Secretary in the U.S., and never a woman in the role at BankAmerica.  Concerns about the “stamina, dedication, and capacity” of women in the workplace were still pervasive.  Almost unbelievably, questions as to whether she would be able to endure “bad language” in high-powered executive meetings were actually raised in Cherie’s interviews for the job.

Being the first woman in such a senior and visible position meant a lot of pressure to succeed.  Fortunately, she had support from many men and women who wanted her to succeed. Her second husband, Gideon Sorokin (now deceased), who she met and married after moving to SF, was amazingly supportive, putting up with 80-hour weeks, early morning and late-night conference calls, and sudden meetings upending planned vacations.  Cherie is eternally grateful for the level of support she received from her son, and her late spouse and his family, and from colleagues, particularly the mentorship of Sam Armacost, Tom Clausen, Dick Rosenberg, and Dave Coulter, the CEOs she was lucky enough to serve with. Such support and mentorship were critical to her success in building the Corporate Secretary role at BankAmerica from what was originally conceived as a rotating two-year assignment into an executive position serving four very different CEOs and the  board of directors over the course of many years and during some of BankAmerica’s most tumultuous times, including its merger with NationsBank.

As Corporate Secretary, Cherie helped move BankAmerica into a leadership role in the governance arena, recognized as such by CalPERS and other major investors who were beginning to intently focus on the governance practices of the companies in which they invested. In her management role, Cherie was known for her insight and for using both her expertise and her power to help others succeed. Along the way, she served as a role model/mentor to countless women seeking to advance in their careers.  In recognition of her leadership and management skills, Cherie’s responsibilities were expanded to cover management of Corporate Communications, Public Policy, and Investment Administration in addition to her role as Corporate Secretary.

The merger with NationsBank provided an opportunity for Cherie to think about taking a break from corporate life. After leaving BankAmerica, Cherie and her husband traveled extensively, grateful for the freedom after those years of never being able to be out of touch with work for more than a week at most.  But during this time she also managed a brief stint with a startup company, co-authored a major book on governance for nonprofits, and did some consulting.  Eventually “retirement” didn’t fully suit her and she was lured back to work in governance consulting on a more regular basis by Kristina Veaco, a former corporate secretary colleague and principal of Veaco Group, a boutique consulting company formed to bring the benefits of sound corporate governance to resource-constrained companies. That work has expanded substantially over the years as the interest of corporate and nonprofit entities in governance has increased.  Cherie’s commitment to nonprofit work has also increased substantially.  She loves being able to use her time, skills and intellect to make a difference not only to the organizations she serves, but also in the lives of individuals and the community.