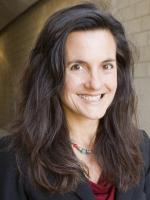 Deb Hubsmith, Founder of the Safe Routes to School National Partnership, was a brilliant, kind and deeply loving spirit and a passionate, hard working and effective advocate who gave selflessly throughout her personal and working life. While she was seeking balance in recent years so she could spend more time connecting with community, dancing, doing yoga and being in nature, she frequently worked in excess of seventy hours per week to achieve her professional goals. In October 2013, Deb was diagnosed with Acute Myeloid Leukemia (AML). She went through many rounds of chemotherapy and a bone marrow transplant at Stanford University Hospital, but the AML and associated complications prevailed. Our beloved Deb passed away on August 18, 2015, twenty-two months after her original diagnosis.

Deb’s work was deeply inspired by her love of Earth, the well-being and health of children, and the safety of all users of our transportation system – a system that she transformed locally, regionally and nationally. She understood that active transportation solved many of the problems that our society and world face today, including the extreme rise in childhood obesity, the large number of injuries and deaths that occur because of roadway and community designs, and the very significant contribution that car trips make to the increase of greenhouse gases and other pollutants into the atmosphere. Deb gave up owning a car nearly twenty years ago; in doing so she knew first-hand how much active transportation nourished the soul, supported spiritual well-being and health, and increased happiness in her own and other’s lives.

Deb was born on June 5, 1969 in New York, New York, and raised in Woodcliff Lake, New Jersey. She was a graduate of Pascack Hills High School and Lehigh University, where she majored in Environmental Science and Resource Management. After college, Deb followed her dream and moved to California, falling in love with Marin County. She lived a beautiful life, loving deeply in all that she did. Deb was an innovator and visionary who fought passionately for what she believed in. She was pleased to play a prominent role as a national leader helping children and adults to safely walk and bicycle in their communities, providing environmental, safety and health benefits to individuals, schools and cities.

Deb championed active transportation for two decades at the local, regional, state and national levels. The cornerstone of her philosophy for social change included collaboration, empowerment of new leaders nationwide, striving for the future we want to create for later generations, as well as developing and maintaining partnerships with other non-profit organizations, schools and government agencies. Each of these philosophies manifested themselves strongly in Deb’s work, making her efforts highly effective and successful.

Deb spearheaded the creation of many programs and projects throughout Marin County. It is because of her vision, energy and perseverance that Marin has become safer for residents and visitors, and more ecologically sustainable. Her life’s work was, and continues to be, a gift to this and future generations.

As a co-founder and the first Executive Director of the Marin County Bicycle Coalition, one of Deb’s earliest accomplishments was getting bike racks on Golden Gate Transit buses throughout Marin, allowing cyclists to use public transportation to easily extend their active transportation commutes. Some of Deb’s greatest accomplishments in Marin include gaining political support and helping to find funds for the reconstruction of the $28 million Cal Park Tunnel, which now allows cyclists and pedestrians to avoid the very dangerous route on East Sir Francis Drake Boulevard, shaving fifteen minutes off of bicyclists’ trips between San Rafael and Larkspur. She was also a key player as an advocate in securing funding and in the overall design of the Lincoln Hill Pathway (along Highway 101 just north of downtown San Rafael), providing a far safer route between northern and central San Rafael. Deb played an important role in helping to identify and secure funding for the Central Marin Ferry Connection Project, the first phase of which is under construction in Larkspur, near the Larkspur Ferry Terminal. Deb was a key player in the Sonoma Marin Area Rail Transit (SMART) campaigns in 2006 and 2008. She mobilized the cycling community’s support for the 2008 SMART train and pathway project ballot initiative. Without Deb’s leadership and successes in mobilizing the cycling community in Marin and Sonoma Counties in support of SMART, the 2008 measure would not have passed.

Deb successfully built political support in all of Marin’s towns, cities and the County of Marin for bicycle/pedestrian facilities and programs. She understood the importance of generating political and community support, and finding the funding for projects needed to make bicycling and walking safer in Marin.

Deb led the advocacy efforts in partnership with the late Congressman James Oberstar from Minnesota, who was at the time chairman of the House Committee on Transportation and Infrastructure, to help author and pass the first national Safe Routes to School legislation. Congressman Oberstar’s bill ended up as part of the 2005 Federal Transportation Bill (known as SAFETEA-LU), resulting in $1.1 billion for Safe Routes to School over the next several years, providing funding for projects and programs that served more than 15,000 schools and that created a national movement that included all fifty states.

During this same period Deb successfully worked with Congressman Oberstar and the Rails to Trails Conservancy to help create the Nonmotorized Transportation Pilot Program (NTPP), which resulted in $100 million to four communities around the country; $25 million of those funds came to Marin County for bicycle and pedestrian projects and programs. The NTPP resulted in dozens of bicycle/pedestrian capital projects and innovative programs that have made the roads safer for cyclists and pedestrians in nearly every one of Marin’s jurisdictions.

At the same time, Deb responded to the growing demand for creating walkable and bikeable environments nationwide for children by expanding on California’s Safe Routes to School program and founding the nonprofit organization Safe Routes to School National Partnership (SRTSNP) in 2005. SRTSNP improves the quality of life for kids and communities by promoting healthy living, safe infrastructure, and physical activity, starting with bicycling and walking to school and beyond. The organization advances policy change, catalyzes support with a vast network of partner organizations as well as schools, policy makers and grassroots supporters, and shares its deep expertise at national, state and local levels with those with mutual goals. Deb founded the organization to support Safe Routes programs across the country in anticipation of the passage of the 2005 Transportation Bill. Deb nurtured the SRTSNP from an all-volunteer organization to a powerful and diverse national coalition including more than 750 partners, a $3 million annual budget and thirty staff dispersed throughout the country, which she managed.

Deb loved yoga and was certified as a yoga instructor in the summer of 2013, a few months before her diagnosis with AML. She was a certified Reiki Master and a tireless dancer; she loved to attend Ecstatic Dance, Open Floor, Sweat your Prayers and other dance events in the San Francisco Bay Area and beyond. She was a nature lover who loved to hike, bicycle, swim and just bask in the sun. Deb had a true love for Kauai, where she felt deeply at home, and where she traveled often with her husband Andy Peri.

During her often intense and painful battle with acute myeloid leukemia, Deb continued to give generously of her heart and spirit. Her love only grew during her illness, and while her professional work was limited to participating on the Board of Directors of the Safe Routes to School National Partnership, she taught her family, friends, colleagues and community some of the greatest lessons about life. Deb’s bright spirit of kindness, generosity, love and peace poured from her heart in the midst of her illness and in the midst of her losing so much of what she valued in her short, precious life.

Deb’s bright, present spirit, her kind, loving, supportive presence and her infectious laugh are deeply missed by her family, friends and colleagues.