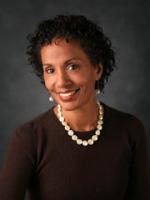 Deborah Santana is a true Renaissance woman. To say she’s an author, business woman, wife, mother and philanthropist is to scratch the surface. Perhaps the best way to understand this woman is to look at her memoir, Space Between the Stars: My Journey to an Open Heart. With grace and wisdom, she explores issues of faith, spirituality, race, sexuality, love, marriage, motherhood and womanhood. Through writing, Deborah shares her ongoing quest to believe in and express her best self—and, in doing so, to love and serve humanity.

Born in San Francisco in the 1950s, Deborah grew up in a culture in profound transition. Her father, a pioneering African-American blues guitarist and singer, and her mother, an independent Irish/British-American career woman, married before interracial unions were legal in many states—and at a time when wives were not expected to work outside the home. They created a colorblind household where all dreams were possible. The speeches of Martin Luther King, Jr. and the songs of Mahalia Jackson helped form Deborah’s sense of equality and social justice.

Ms. Santana emerged as a successful entrepreneur in the early 70s. At the age of twenty-two, she owned and managed a thriving vegetarian restaurant in the heart of San Francisco. She met musician Carlos Santana at a concert at the Marin Civic Center. They married in 1973 and have three children together. In 1994, the couple assumed management of the Santana Band.

In 1998, the Santanas established the Milagro Foundation, a nonprofit organization serving children and youth in the areas of health, education and the arts. The Milagro Foundation (milagro means miracle) has made hundreds of grants to underserved and underprivileged children and youth in thirty states and thirty-five countries, with a focus on agencies in Marin County.

Santana’s accomplishments have been widely recognized. In 2000, Ms. Santana received the UCLA César E. Chávez Spirit Award in recognition of her philanthropic work. In 2004, she received a Women of Distinction Award from Soroptimist International for her outstanding achievements in business and leadership. In 2004, she and Carlos were recognized by YOUTHAIDS for their efforts battling the AIDS pandemic in Africa. In 2006 Deborah received one of the Marin Human Rights Commission’s Martin Luther King, Jr. Humanitarian Awards.

Deborah Santana was inducted into the Marin Women’s Hall of Fame in 2007, a year when she also received the Mills College Distinguished Achievement Award. She has received the following recognitions: 2010-Bay Area Blacks in Philanthropy Catalyst Award, 2012-Women’s eNews 21 Leaders for the 21st Century Award.

Her Anthology contributions include Life Moments for Women (2012,) Nothing But the Truth, So Help Me God (2006) and Tutu, As I Know Him: On a Personal Note.