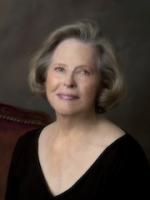 Few people affected the greater public good more than Dolores Nave, affectionately known as “Dolly.” At age twenty, Dolly was a widow with two children after her first husband was lost in the Korean War. In 1955, she married Rich Nave, and they raised eight children. With her children involved in athletics and recreational activities, Dolly had firsthand knowledge of park, recreation facilities and facility use requirements, and soon set out to improve our parks. Since beginning these projects in 1982, Dolly can be single-handledly credited with more public park improvements than any other private citizen of our time.

Over the last forty years, Dolly was at the forefront of several projects at San Rafael High School. As project coordinator in the 80s, Dolly raised funds to grade and add two new electronic scoreboards for softball and baseball. In addition, Dolly replaced the surge and filter tanks for the pool and refurbished the decks.

In the 90s, as the Alumni Project Coordinator, Dolly started a new long-term project to paint the entire school. The initial phase was completed, and every year since another phase of the paint project has been completed. Dolly initiated a “Save Night Football” campaign, resulting in the installation of state of the art football lights at Miller Field. Dolly’s fundraising efforts led to the replacement of the infrastructure at the main gym, football, baseball and track fields. She also installed a tank for the swimming pool to save water and operating expenses, and completed the installation of new all-weather track surface including drainage, side curbs, fencing and high tech sports track surface. San Rafael High School was the first in Marin County to have an all weather track.

In 1993, Dolly was a founding board member and construction chair of The Marin Bocce Federation at Albert Park. In 1994, Dolly’s efforts led to the completion of the first phase, six state of the art, world class synthetic Bocce ball courts in the United States. The Marin Bocce Federation now provides recreation to over 1,000 players per week. Marin Bocce was named the most Beautiful Public Bocce Facility in America and received the Presidential Renew America Award for Environmental Achievements.

Dolly received many awards for her outstanding accomplishments and efforts. In 1988, Dolly was named Citizen of the Year in San Rafael. In 1989, she was awarded the Marv Lechner Award from San Rafael High School, and in 1991, she was named Women of the Year for the third Senate District for the State of California. In 1993, Dolly was inducted in the Marin County High School Athletic Hall of Fame for special recognition, and in 2010, Dolly and Rich were inducted in the Wall of Honor at San Rafael High School.

Dolly would be the first to tell you that she did not do this alone. Such accomplishments can only be realized with the full cooperation of concerned local government, school districts, civic-minded local business and motivated citizens. Dolly was a true volunteer, never receiving compensation for any of her projects. Dolly provided millions of dollars in funding and in-kind donations for many school fields, parks and recreation sites.