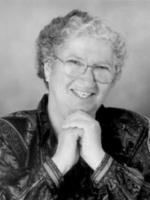 Almost alone among the ranchers, she and her husband supported the creation of the Point Reyes National Seashore, opposed high-density in the West Marin General Plan, and supported A-60 zoning. Mrs. Straus and her family were dairy ranchers for more than fifty years, providing a model for environmental awareness within the farming community. Since 1960, she opened the ranch to students and others to teach about agricultural life. Her family transformed their dairy into an organic operation, the first one west of the Mississippi.

Mrs. Straus helped conceive and produce Farming on the Edge, by John Hart, the story of agricultural land preservation in Marin. She held a BA in Natural Science and Mathematics from Bard College in New York. She was on the board of the Greenbelt Alliance, the Tomales Bay Advisory Committee, and the Rural Land Use Committee of the Marin Conservation League, and was a member of the West Marin Growers Group. She has also served on the environmental Action Committee of West Marin, the Environmental Forum of Marin and the Community Partnership Committee of the Marin Community Foundation. She was an artist and a former member of Artisans Gallery.