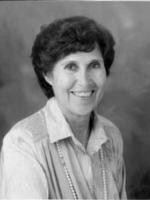 Etta Allen is a Marin pioneer for women in non-traditional careers. Etta showed an early resolve for entering fields not ordinarily open to women by earning an airplane pilot’s license while still a teenager. Later, she co-founded a heating, air conditioning and sheet metal business with her husband, Jim. Upon his death, she faced tremendous obstacles to obtaining a heating/ventilation contractor’s license for herself, despite years of contracting experience. Through persistence and patience – the hallmarks of Etta’s success – she was able to take the contractor’s exam. Allen Heating and Sheeting Metal, Inc. continues to be a successful Marin business.

Ms. Allen went on to become the first woman President of the Marin Builder’s Exchange, where she is still an active member. She was the first woman contractor on the executive committee of the California Association of Builder’s Exchanges. She also served on the Apprentice Committee for Women in Non-Traditional Careers. Etta was elected to the Marin Community College Board for two terms (eight years). She was President of the Bay Area Trustees for Community Colleges, and continues to be a leader in the Marin community. She was appointed by the Governor to the State Compensation Insurance Fund Board, and she was the first woman President of the San Rafael Rotary Club and was President of the San Rafael Chamber of Commerce. She maintains a strong involvement with both organizations. A board member of the Marin General Hospital Foundation for many years, she recently moved to the Hospital’s Management Board of Directors. In addition, Etta is a director of Westamerica Bank.