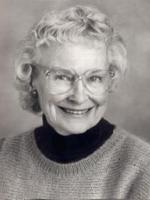 Frances Steadman’s selection for the 1998 Marin Women’s Hall of Fame is an appropriate tribute to her courage and leadership in the cause of peace and justice. Born to Quaker parents with strong convictions, Steadman grew up with a commitment to oppose all warfare and to disallow discrimination against people of other races. For more than three decades, Stedman has risked her own welfare and freedom on behalf of disenfranchised peoples in this country and around the world. She has immersed herself in social issues such as civil rights, nuclear war, prison reform, homelessness, human rights and environmental degradation. Her selfless dedication to others is truly inspiring.

In the early Sixties, Steadman traveled into the South to support black suffrage and to register black voters. She was also a vocal supporter of the nuclear disarmament movement, and withstood a jail sentence for protesting against nuclear weapons. At some risk to her own life and health, she has spearheaded the collection and distribution of material aid to people in Guatemala, Nicaragua, El Salvador and Chiapas.

Steadman has been a longtime chair of the Social Concerns Committee of the Marin Unitarian Fellowship, and a leading spirit of the Marin Gray Panthers. She has been an activist with the Marin Advocates for Justice and a board member of the Marin Interfaith Task Force, as well as a member of the Marin Welfare and Immigration Network (Marin WIN). She has organized the peace and social justice contingent of the Corte Madera Fourth of July Parade for the past two decades. Despite all of this activity, she finds time on a weekly basis to lead the singing at a local senior day care center.

Frances Steadman has demonstrated the tremendous energy, organizing ability, charm and goodwill that women can bring to causes that serve not only the needy, but also society. She is an exemplary role model for her family, her friends and her community.