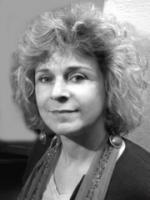 Gloria’s work and focus are from three sources: love and respect for children, an understanding of the profound benefits of art and play as healing tools, a belief that everyone has something of value to contribute, and that everyone needs opportunities to give back.

At thirteen, she became a child advocate, as a volunteer in a NYC pediatric hospital where she painted with critically ill children. After high school she traveled and founded three small schools for children in Spain, Holland and Peru. Using art, she followed her lifelong dreams and passion and created a unique way for children to cope and begin healing.

Gloria received a B.F.A. from The Cooper Union in New York City, a M.A. in counseling psychology and an honorary M.A. degree in expressive art therapy from The California Institute of Integral Studies in San Francisco. She moved to the Bay Area in 1980, and in 1981 she began therapeutic art programs at two San Francisco hospitals; California Pacific Medical Center/University of California and San Francisco’s Moffitt Hospital. At the Children’s Cancer Research Institute, she created an arts program to help children cope and express themselves. “The children,” she remembers, “taught me to listen and to sit with pain.”

In 1989, she founded the DrawBridge Foundation: An Arts Program for Homeless Children in the canal district of San Rafael. It has served over 10,000 children in family shelters, providing safety, stability and respect for homeless children by offering art, collage, role-playing and other artistic methods.

DrawBridge also has thirty sites in seven bay area counties. As one of the earliest and most successful programs for the homeless population of Marin, DrawBridge has become a model for other states and also established international partnerships with groups in Afghanistan, Palestine, India and Mexico. Over the past ten years, Gloria offered training in working with children in crisis in Europe and Africa, with a focus on children affected by HIV/AIDS.

Gloria Simoneaux was founder, fund-raiser and Executive Director of Drawbridge for nineteen years. She recently started a new organization, Harambee Arts, which partners with African grassroots programs to train local caregivers to provide art programs for vulnerable children in an environment that fosters their sense of joy, creativity and exuberance. Harambee, a Swahili word for “Let’s Pull Together,” sums up Gloria’s desires for helping children.

Gloria’s vision and perseverance have raised social consciousness and advanced human rights throughout the world. Her work has empowered others, especially children. In 2008 Gloria was awarded a Fulbright Fellowship to lecture and do research at the University of Nairobi, Kenya, for a year.

The Hall of Fame honors Gloria in Social Change, for her continued dedication to help homeless children.