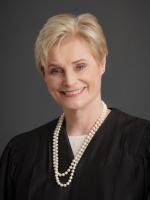 Judge Verna Adams has served as a Marin county Superior Court Judge since 1999. When asked to give the Marin Women’s Hall of Fame a brief autobiography, here is what she said:

I was blessed to be born in a country where a little girl from a small town in Indiana can grow up to be inducted into the Marin Women’s Hall of Fame.

My good fortune started with my birth shortly after World War II, to two loving and supportive parents. My parents came of age during the Great Depression; they were not particularly prosperous nor well educated—my mother was not able to graduate from high school—but they were determined to provide their children with the opportunities they never had.

I was always encouraged (and sometimes pressured) to excel in school, and I did. I was a serious, conscientious little kid. I took music lessons, was not very talented, but managed to play the Minute Waltz in 59 seconds.

When I was in middle school, I gave up on music lessons and decided to become an attorney when I grew up. This, despite having no role models. I had never met a woman attorney and I am not sure there were any near where I lived.

My parents were tolerant but a bit dubious about my plans—when I was in high school they insisted that I take a typing class so that if all else failed I could get a job as a secretary. I remember spending most of a summer banging away on an old Royal typewriter with blank keys, learning the touch system on a QWERTY keyboard.  For the next several decades I would not admit that I knew how to type, but then I got a computer and I am now grateful to my parents for their clairvoyance.

I enrolled at Columbia Law School for my first year of law school and then transferred to Stanford Law School, graduating in 1970. I went from all-women Wellesley to a law school class where I was only one of three women, which was something of a shock. My classmates were pleasant enough, although I sometimes heard grumbling about my taking a spot that could be occupied by a man (who, presumably, would do more with a law degree than I would). I asked the Dean of Admissions at Stanford Law School why there weren’t more women in the school, and he carefully explained that qualified women just didn’t seem to apply.

While in law school I was able to spend some time at California Rural Legal Assistance in Delano, California. CRLA was the legal branch of the California Farm Workers’ Union, then led by Cesar Chavez. I got to meet Mr. Chavez and I would have loved to join CRLA, but they had little money and no openings for totally inexperienced attorneys.

During a brief stint working at a downtown San Francisco law firm, I saw an article in the women’s section of the San Francisco Chronicle about a female law firm in San Rafael. After I sent them a letter and my resume, Beverly Savitt invited me to come to San Rafael for lunch. That was my lucky day. I met with Beverly and her partner Ann Diamond (both of whom were early MWHF inductees,) accepted their job offer and never looked back. Ann and Beverly were my teachers. Beverly has been my mentor and one of my best friends ever since that day in 1971.

I moved to Marin soon after and threw myself into the practice of family law and community service. I always had a few pro bono cases going and I volunteered at Legal Aid. I served on the Board of Directors of Planned Parenthood and the Center for the Family in Transition. In 1986 I and several other attorneys got together and formed what is now the Family and Children’s Law Center, which furnishes low cost legal services to adults and children involved in a family law matter, including domestic violence. I served on their board of directors for years. Over time I became increasingly aware of the growing number of self-represented litigants in family law and their special needs.

While I was practicing law I served as President of the Marin County Bar Association (the third woman president, after Ann Diamond and Beverly Savitt.) I was also honored by my peers, who listed me in “The Best Lawyers in America” for many years before my judicial appointment.

I was sworn in as a Judge of the Marin County Superior Court in 1999.

During the sixteen years of my judicial service, I have worked in every division of the court—criminal, civil, family law and juvenile, and probate. I was elected by my colleagues to serve as Presiding Judge and I was selected by the Chief Justice of California as one of nineteen judges (there are about 1,600 of us statewide) to serve on the Strategic Evaluation Committee, charged with making recommendations to streamline and improve court administration in California.

After I became a judge, I began to understand the needs of self-represented litigants from a different and enlarged perspective. I formed the task force which created the Legal Self-Help Center of Marin, a place where those without attorneys can obtain assistance with filling out legal forms, tips on court presentation and protocol, and general legal information. It has met an enormous and growing need in our county. I served as President of its Board of Directors for several years after the Center opened.

When I joined the court, we had only one specialty court, an adult drug court. I saw the need for other specialty courts that could address the needs of our most underserved populations in Marin. I formed and served as the first judge presiding over Mental Health Court and Domestic Violence Court.

Family law has always been my specialty. As a judge in the Family Law Division, I became even more aware of the needs of self-represented litigants in all aspects of family law, especially domestic violence and child custody. We have a special court session for self-represented litigants where we furnish the assistance of volunteer attorneys and paralegals to help them resolve issues and fill out paperwork. I initiated a settlement conference program for parties involved in high-conflict custody disputes. We convene a panel comprised of a judge, a family law attorney mediator and a mental health professional to help parties work out a custody plan that is in their children’s best interest. The project has been a stunning success. It is the first such program in the State of California.

Most recently, in collaboration with my colleague Judge Beverly Wood and the family law bar, I have addressed the problem of visitation supervision. In some cases, the court orders visitation between a parent and child to be supervised, to ensure the child’s safety and well-being. Often the parents in such a case cannot afford the cost of supervision. We created a visitation supervisors’ training program whereby qualified individuals could receive the required training for free, in exchange for furnishing hours of free supervision for families in crisis. Again, it is the first such program in the State of California.

My passion is to make our justice system accessible to the most disenfranchised members of our community: children, women, victims of domestic violence and all who must navigate the legal system without an attorney. If I have made a small contribution to bettering their lives, then I have succeeded.

I am grateful for the opportunity to give back to this community, which has given so much to me. I could not have done it without the assistance of many people. I can’t thank all of you by name, but you know who you are. I especially want to mention the support of my Boudett family: step-children, Michael and Josselyn, and my daughter Justine. My two Judge Beverly’s: Judge Beverly Wood, the best colleague one could hope for, who makes me a better judge, every day; and Judge Beverly Savitt, my life-long friend, mentor and advisor. And, most important, my husband, John Boudett, who is truly the wind beneath my wings.