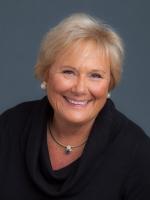 Joan Brown created Marin County’s internationally acclaimed Civic Center Volunteers (CCV), and directed it for more than thirty-two years. She started the program after property-tax-cutting Proposition 13 passed, with zero volunteers, and the first-ever county strike looming only weeks away. The program grew to more than 8,500 volunteers in 2011 when Joan retired, increasing services that year to Marin residents by more than $10.5 million and accumulatively more than $125 million. Along the way she maintained excellent collaborative relationships with unions, line workers and management. CCV honored both strikes that occurred during Joan’s tenure, supporting the strongly held value that volunteers augment, not replace, paid staff.

In the 1970s when Joan took the job, the Women’s Liberation movement was gaining steam. Women were getting the message that they could be both good mothers and succeed in careers outside the home. The 1979 Marin Independent Journal article announcing the new program promised re-entry women the chance to sign a contract for a specific job and period of time, update their skills and resume, and receive a letter of recommendation – and while in the process have the opportunity to increase their confidence about re-entering the workforce. CCV received fifty-five responses to the IJ headline for the twenty-five positions available at the Civic Center for volunteers. The other half of Joan’s challenge was to find meaningful jobs for her volunteers. Joan inspired the confidence of paid staff that volunteers would be dependable, do their assigned work, not take the jobs of paid staff, and potentially add skills and backgrounds that were not currently available to their teams.

CCV has consistently reflected the county’s demographic and economic trends, providing volunteer opportunities for immigrants, career-changers, students, retirees, newcomers, people recovering from physical and mental illnesses and others. Joan’s empathetic interviews and her uncanny ability to imagine the ‘perfect fit for a volunteer, frequently inspired departments to create jobs tailored to the specific skills of volunteers. When job opportunities for people with serious mental illness were largely limited to parking lot attendants, Joan approached Community Mental Health to partner in creating the Job Coach Program. It provided volunteer on-the-job coaches to those struggling with mental illness in meaningful, stimulating jobs. For ten gratifying years the program flourished by both creating supportive training and work experience for fragile volunteers to succeed and move on to paid employment, and by creating opportunities for paid staff to work with individuals with severe mental illness, often resulting in the dispelling of negative stereotypes. Joan was key in getting the Employee Recognition program started in the 1980’s, and headed the program for years. She was also founding Editor-in-Chief of Frankly Speaking, the employee newsletter by and for employees. It was the first countywide centralized communication in the county, and an important vehicle for employees to be informed about the accomplishments of their coworkers.

A Bit of Background: Before Joan’s family moved to a Chicago suburb when she was in fourth grade, she had lived in Boston and Denver. She grew up with her older brother in a family in which service and helping others were key values. Her father was a Congregational minister and her mother an enthusiastic and dedicated ‘full-time minister’s wife.’ She confided to Joan in her later years, “If times had been different, I would have been the minister instead of the minister’s wife.” Two of Joan’s strongest messages from her parents were, “Always do your best, ” and “If you work hard enough you can accomplish almost anything.” Her mother had deep interests in psychology and the power of positive thinking. She was naturally drawn to reaching out to those in great psychological pain and difficult life transitions. Daily discussions at the dinner table and the example of her parents’ outreach nurtured Joan’s empathy with a broad range of people at an early age.

Joan graduated from Northwestern University in 1964, wed the next day, and lived in Stanford housing the year her husband completed his MBA and she her first year of teaching. The summer of 1965 they traveled behind the Iron Curtain for two and a half months at the height of the cold war. She experienced government’s ability to absolutely control information to its citizens and understood at a deeper level that if you don’t participate in democracy you can lose it. The act of participation in local government is the cornerstone of democracy—and of the CCV program.

In 1969, Joan read the announcement of a proposal to build the biggest regional shopping center in the continental United States – in the rolling hills owned by the Archdiocese of San Francisco across from Joan’s home in Los Altos. Six months pregnant and not wanting to raise her child in the reflection of mercury mall lights, she determined something had to be done to stop this kind of development. Armed with the belief from childhood that if you worked hard enough you could accomplish almost anything, she and her husband inspired local residents to overcome their apathy and fear that the battle was too big to win. Experienced Peninsula environmental leaders, including the venerable Lois Crozier Hogle, became mentors. Demonstrating the power of persistence and of accurate information, the value of knowing oneself, and deep compassion, Lois ultimately became Joan’s ‘West Coast Mom.’ Joan went on to serve as mentor to countless others and has had the joy of a German exchange daughter for a year, plus two ‘surrogate daughters’ who have lived in her home, in addition to her son, Kevin.

From 1969-1975, Joan balanced being a mom, substitute teacher, and activist volunteer. She broadened her horizons and learned important political skills. Due to unrelenting pubic pressure, the shopping-center plans were eventually scrapped. The next goal was to develop avenues to encourage appropriate development. Joan volunteered several extremely busy years on the steering committee and was instrumental in creating the Mid-Peninsula Regional Park and Open Space District in 1972. Their first goal was to acquire quickly disappearing agricultural land on the Mid-Peninsula. In 1975, the Brown family moved to Marin. A few years later, the open space district purchased a major portion of the land that had turned Joan into an environmental activist. That land now is the popular Rancho San Antonio County Park.

New to Marin and knowing that friendships are built on common values and working together, Joan volunteered. She created the PR campaign for now-Senator Barbara Boxer’s first elected position as Marin County Supervisor in 1976. Boxer was the second woman ever elected to the Board; Vera Schultz was the first in 1952. Joan was also active in Environmental Forum, served on the steering committee that created the Kentfield Schools Foundation, served on her homeowner’s board, and was a founding member of the San Francisco Women’s Foundation. Though she loved substitute teaching, she began to feel she wanted more challenge career-wise. Joan applied for a job without preparing for the interview and predictably was not offered the job. That humbling experience turned out to be a blessing in disguise. Some months later, Joan interviewed for a three-month part time job to create a pilot volunteer program for Marin County, not because she wanted the job but because she wanted the interview experience! That interview led to her thirty-two (plus) year career with the County of Marin.

Life happens, and tough challenges during her career included divorce, attempts to reduce and eliminate the CCV program, and a protracted, successful struggle to overcome a chronic immune illness. Joan has been a highly sought-out international trainer and speaker in volunteer management. She presented at the First Asia-Pacific Conference on Volunteer Management in South Korea. Representing CCV, she has been on National Public Radio in 300 cities, the Charles Osgood Show, in the New York Times and other newspapers and magazines across the U.S. She has received numerous awards and honors at the local, national and international level, including the coveted Outstanding Volunteer Manager of the Year award from the Association of Volunteer Management. Civic Center Volunteers’ many recognitions include the first-ever National Association of Counties’ Acts of Caring Award, presented in the Capitol Building in Washington D.C.

Locally, Joan volunteered with various boards and committees, including ten years with the Family and Children’s Law Center. She was active in Wednesday Morning Dialogue for more than thirty years, including two terms as president, and currently as secretary. She served on national committees regarding volunteer management and was a founder of two professional associations for volunteer managers in local government. In retirement, Joan continues to be active in political and social issues, is a Civic Center Volunteer, volunteers weekly with the homeless in the REST program, and was recently the Public Member of the Editorial Board for the Marin Independent Journal for a term. Her greatest joy is her family and extended family. Her grandchildren are the brightest lights in her life.