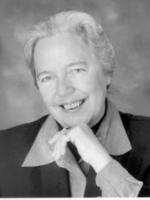 Growing up in Fairfax, the young Karin Alstrom spent long, happy hours roaming Marin’s hills. In the early 1970s, when her favorite Cascade Canyon was targeted for development, Ms. Urquhart declared, “Over my dead body!”, and launched a career that swept her from devoted mother of seven to environmentalist with respected credentials and political sophistication.

Ms. Urquhart’s environmental work as an early organizer of People for Fairfax Cascades dovetailed with the creation of the Marin Open Space District, which now manages over 10,000 acres of recreational land in Marin. Ms. Urquhart has served as a commissioner for the district since its creation in 1973.

For many, Ms. Urquhart’s name is synonymous with the Marin Conservation League, whose board she joined in 1976 and then presided over from 1977 to 1979. She became MCL’s Executive Director in 1980, and successfully managed its steady growth in membership, community respect and credibility. She has served on the boards of a multitude of local groups, including the Marconi Conference Center, Marin County Chamber of Commerce, Marin Society of Artists, Marin Agricultural Land Trust, Environmental Federation of California, People for Open Space and the Environmental Forum of Marin. In 1982, she was the founding chair of the Marin Conservation Corps.

In 1996, she retired from the Conservation League and became Executive Director of Digital Village. She was also appointed by the Board of Supervisors to represent the County of Marin on the board of the Marin Community Foundation. Retired once again, she is enjoying her garden, her business (Urquhart and Associates,) and continues to be active on many non-profit, Marin County boards.