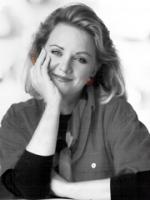 (1945 – 2007) The mystical beings and familiar icons in Laurel Burch’s work expressed her own brilliant and loving spirit. Her artwork and designs of fantastic felines, mythical horses, creatures from ocean and sky and people from many lands all serve as symbols to remind us of the ongoing world of the spirit. As a self-taught painter and entrepreneur, Laurel perceived herself as a folk artist. She told visual stories, beginning as a child when she fashioned small gifts from odds and ends for her grandmother. At fourteen she left her troubled home, taking with her only a paper bag of clothes and osteopetrosis, the rare bone disease she was born with.

With no job, no money and no plans, she landed in San Francisco, where she earned her room and board by cooking, cleaning and babysitting. She began making and wearing jewelry, earrings and necklaces from old coins, bones and beads. Her creations became bridges to friendships and patrons, and these artifacts became treasures for people all across the country. Collecting Laurel Burch’s pieces became a cultural phenomenon.

Throughout her life, she refused to give in to her painful osteopetrosis. Even during long periods of convalescence, when she was forced to paint from a bed or a wheelchair, she held onto her paints and her brushes. “I refuse to have anything in my life,” she said, “that I can’t turn into something magical and beautiful.” Even from a hospital bed, she continued to create, calling up that indomitable spirit from what she called her “inner sanctum.” Later, in an isolation forced by her illness, Laurel was able to travel the world via her website, sharing her designs and messages all over the globe in the forms of prints, fabrics, scarves and more.

Laurel performed hundreds of speaking engagements around the country, with an emphasis on healing. “My bone disease was my gift,” she told others. And her gift of generosity and commitment extended to many organizations, where she gave her time, art work, name and heart to hundreds of boards, organizations and causes, including Glide Memorial Church, KQED TV, San Jose Cleveland Ballet, Cystic Fibrosis Foundation, Gandhi Memorial International Foundation and many others.

She was appreciated by many of these organizations, who celebrated her humanitarian participation as well as her art work. Her awards include the SF Entrepreneur of the Year Award, Women of Vision Award, Living Legacy Award and the Eleanor Roosevelt Human Rights Award.