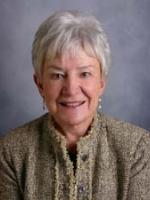 Marilyn Smith’s middle name should be “Music.” She arrived in the Bay Area from Kansas (just like Dorothy) in 1957, with a degree in Music Education from Kansas University. Typical of the time, Marilyn placed her career on hold while she and her husband Bob raised five children, who all attended Mill Valley Public Schools.

Marilyn became involved with the music program at Old Mill School. Before she knew it, she was producing musicals for Steve Riffkin, then a student teacher. Concurrently, she produced outdoor concerts for the Marin Symphony and the Children’s Fun Concerts with Hugo Rinaldi at the Veteran’s Auditorium at the Civic Center. In 1976, with funding from Mill Valley, Marilyn produced Steve Riffkin’s original Bicentennial Suite and presented it in the Headlands. This production involved setting up a shuttle bus system, which led to her next adventure.

The Board of the Mountain Play found itself without a production staff; they had filled in the 1976 program with a free band concert and picnic. They discovered they needed a shuttle bus system to get crowds on and off the mountain, so they asked Marilyn to produce the next year’s play (mainly because she had busing experience.) Marilyn’s first Mountain Play (1977) was “Clothes,” a musical written by George Leonard and Susan Trott, with original music by Steve Riffkin. A takeoff on “The Emperors New Clothes,” the play was an instant hit. With “Clothes,” the Mountain Play discovered that Marin audiences love musical theater.

During the next three years, Marilyn continued as a volunteer producer of the event. She brought in Martin Frick, Michelle Swanson and Ben Dickson as Artistic Directors. In 1981, James Dunn, then head of the Drama Department at the College of Marin, came on board, bringing access to an enthusiastic talent pool from the College. Dunn added surprise elements to almost every production, but Marilyn would be the one who scouted and located the special effects requested by Dunn. The effects ran the gamut from a World War II airplane, to a cow, a horse-drawn carriage, a motorcycle, even Cuban dancers – all effects that gave the productions authenticity.

For the last quarter century, musicals have continued to thrill Mountain Play audiences. Marilyn continued as Executive Director until retiring in 1999, her twenty-third year with the organization. Today the Mountain Play is still thriving. This wouldn’t have happened without Marilyn Smith, who had the extraordinary ability to visualize possibilities, and organize and orchestrate vision to reality.