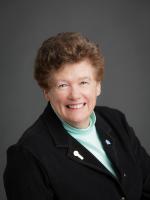 Some people are lucky enough to know what they want to be early in life. That was true for Mary Kay. She wanted (and needed) to be of service. Right after high school she entered the Sisters of Mercy and became a teacher, striving to make learning relevant and fun for her students. For her last assignment, she taught social consciousness and creative writing at the high school from which she graduated.

A student in (and of) the sixties, Mary Kay became involved, like many of her contemporaries, in the civil rights and anti-war movements of the era. Not a stranger to protests and marches, she hit the streets with the best of them. Recognizing that public witnessing was an important social justice message, she and her sisters were also deeply committed to internal work as well, studying non-violence and systemic racism, attending seminars and study groups throughout her tenure as a Sister.

She earned her Master’s Degree in counseling from Loyola University Baltimore, after doing graduate work in psychology and religion at University of Detroit Mercy and St. Basil’s New School of Religion, where she studied with Dan and Phil Berrigan, Matthew Fox and Vine Deloria, among others. She worked on a Master’s in filmmaking at Wayne State University as well, completing a final film on women dieting (some things never change.)

Many of Mary Kay’s contemporaries were involved in the Women’s Ordination Conference, exhorting the Catholic Church to acknowledge women as equal ministers. While the Conference still exists, equality remains elusive. Mary Kay eventually came to the reluctant realization that women’s place in the Catholic Church was not going to change. As her own personal statement to that reality, she left the Church and, as a natural result of that declaration, left the Religious Order that was her home and her community.

The transition from a life of professed poverty was initially rocky. She became the only dishwasher in Baltimore with a Master’s Degree. On weekends and evenings she sold waterless cookware, giving in-home demonstrations on how to cook upside down pineapple cake on top of the stove. After a short stint with the Baltimore City School system in their home and hospital education program, she moved to California to be with family members who had moved west to escape the harsh Michigan winters.

Out west, Mary Kay explored teaching and non-profit positions. She worked for the Center for Independent Learning, and when a position became available with a new start-up neighborhood non-profit, Canal Community Alliance, she applied for and was hired as one of the assistant directors. Her experience with starting community gardens and her degrees in education and counseling sealed the hiring deal. The organization officially opened its doors in April 1982 with ten community-based programs, based entirely on an extensive needs assessment of the neighborhood conducted by the San Francisco Foundation.

During her nine years at Canal Community Alliance, Mary Kay earned her doctorate in higher education and social change. Her dissertation, “The Politics of Compassion,” was based on food distribution in low income communities, proving that the ‘how’ of service was as important, if not more so, than the ‘what’ of service. She was instrumental in starting a social enterprise at CCA, meeting with Ben and Jerry to become the west coast distributor of their new product, Rainforest Crunch. She showcased the product at the annual Fancy Food Show in San Francisco and did tasting events at Macy’s and other venues to promote the delectable treat.

Mary Kay recognized the value and power of working locally, among the people, in a neighborhood environment, but she was also enticed by service with a broader scope. Looking at work, belief systems and service holistically, she decided to apply for the assistant executive director at Seva Foundation. Mary Kay was introduced to Wavy Gravy, Ram Dass and the Grateful Dead as Seva’s first assistant executive director. Seva is an international service organization working primarily in India and Nepal to eliminate unnecessary blindness. The high prevalence of cataracts in those regions of the world prompted a concentrated response. A simple surgery, perfected over many years, has resulted in hundreds of thousand of people regaining their sight, and therefore their abilities to function as productive members of their families and communities. Seva (Sanskrit for “Service”) was also very much involved in Mexico, and Guatemala, and among Native Americans. During her time at Seva, she worked with board and staff to build an eye hospital in Nepal and to create the technical infrastructure to produce the lenses used in cataract surgeries. She left Seva when an opportunity arose at Homeward Bound (then the Marin Housing Center) to create a four-month pilot program for homeless families in motels.

That was 1993, and she’s still at it. Mary Kay fell in love with the organization’s mission and literally found a home at Homeward Bound. The organization’s willingness to challenge the status quo, to work collaboratively in the community and to create new paradigms of service delivery were (and are) key factors in the viability and versatility of the organization she loves. Working closely with so many staff, board, colleagues and homeless people to end homelessness in the community is both compelling and critically necessary. Mary Kay became a certified chocolatier at L’Ecole Chocolat when Homeward Bound decided to create a line of truffles. She took a class at the Santa Rosa Junior College in hydroponic gardening to explore food production possibilities at the organization’s headquarters. Creating the Next Key Center with administrative offices, an event space, an instructional kitchen for Fresh Starts Culinary Academy and transitional housing for people engaged in training programs was the fruit of working together with a creative, focused and dynamic board and staff. Oma Village 1 for homeless families is the current venture Mary Kay and her team of co-conspirators are working on. Building affordable housing in Marin is both challenging and achievable. Oma Village 1 successfully breezed through the approval process with notable community support. It will be completed in the summer of 2016.

Mary Kay, or, “MK” as most refer to her, continually gathers her inspiration from the people she is privileged to serve on behalf of the whole community. Over the years, MK, a published poet, has written about home and homelessness, using her craft to probe some of the deeper issues involved. “Home Is….” is a reflection on what this powerful four-letter word means:

Home is more than a word,
though words spoken with an open heart
can feel like a living room,
or just-baked bread—
broken, buttered, and shared.

Homes are built every day
without brick and mortar,
their foundations require no retrofit.
Homes like these are people
who allow their hearts to become easy chairs,
people whose eyes and ears open doors to strangers,
to visitors who may have lost their way.
They create a welcome mat,
often to the most unwelcomed,
giving place, providing refuge from life’s harsher elements.

Homes are built in the way a word is spoken,
and homes are made in a mere glance,
in the chance meeting with another
who enters that sanctuary of welcome.