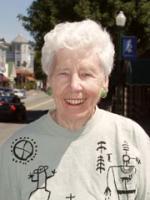 “Learning and teaching are my passions,” said Maryjane Dunstan, who was first, last and always an educator. After teaching at Merritt College and College of Marin, she was recruited by the State Department to teach in Burma under a Fulbright grant. Her work was so exceptional her one-year appointment was extended to four.

Maryjane founded the Communications Department at College of Marin, taught there for twenty years, and co-authored two future studies textbooks. A true visionary, she developed courses such as “Inventing the Future”, at which Buckminster Fuller spoke. Her “Future Fare” in the early 70s envisioned such unheard of concepts as laser holograms, geodesic domes and even personal computers. Maryjane believed that educators have responsibility to the community. She served tirelessly on elected and appointed Larkspur commissions. An untiring catalyst for change, Maryjane always knew what to do and didn’t hesitate to enlist others in getting it done. She earned the title of “Boss of Larkspur” because no matter how thorny the issue, she could always smile while she twisted arms and persuaded others to see things her way.

Maryjane also made her mark in the literary community. Co-owner of the beloved Artist’s Proof Bookstore on Magnolia Avenue, she hosted a series of literary lunches first at Fabrizio’s, then at A Clean Well-Lighted Place for Books, and finally at the Larkspur Cafe Theater. Not only did she bring in world-class authors, she also engaged them in conversations that went straight to the heart of their work. She stripped away all facades, ultimately revealing each author as one of us. Before her death in 2002, she left her friends some words of appreciation, along with a few regrets:

“I regret that I cannot hop out of bed and walk down Magnolia today… that I’m not out on the links trying for another hole-in-one! I regret that I am not able to send daily emails to our elected officials seeking their active leadership for peaceful problem solving and UN negotiations rather than wars and more killing fields. Yet treasuring each moment… I feel a measure of peace… I have evolved in a culture when we women gained some rights and are now emerging as leaders for a just and peaceful world.”