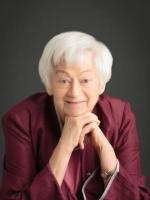 Born in Transylvania in 1925 as Olga Davis, Olga immigrated to the United States in 1931 with her mother, two sisters and brother. Her father had emigrated four years before and settled in New York. A skilled craftsman, he arrived in New York with just his violin and thirty-eight dollars in his pocket. A year later, he opened a furniture-making shop in Manhattan, and four years later, he applied for American citizenship and sent for his family. The family lived in a comfortable three-bedroom apartment in a two-story, wood-framed building in the Bronx, furnished beautifully. It was a startling contrast to the family’s two-room cottage with a dirt-floored kitchen in Transylvania.

By the time the family arrived in New York, Olga’s father had taught himself English by reading The New York Times every day, translating unfamiliar words with an English-Hungarian dictionary by his side. Through curiosity and single-minded determination, he became an articulate English speaker with an excellent vocabulary. The New York Times became a revered object in the Davis household; no other newspaper was allowed in the home. At first Olga and her siblings wanted to huddle together in the house, talking to each other in Hungarian. But their parents shooed them out to the street to play with kids in the neighborhood. When they started at New York public schools three months later, they all spoke unaccented English fluently. However, they did have some cultural missteps; once, when Olga’s brother Alex was playing stickball with some boys in the street, the boys told him to “run home, run home” after a good hit. Rather than going around the bases, Alex ran up the stairs of the house and through the front door.

During the 1930s, when the United States fell into the depths of the Great Depression, Olga’s family struggled. Her parents took pride in not relying on government assistance, even when her mother had trouble putting food on the table. Although their parents seldom revealed their financial difficulties, the Davis children sometimes heard them discussing how they would be able to pay the bills, and they knew their mother occasionally had to ask the grocer for credit. The parents kept the atmosphere in the house generally cheerful, but the children knew at the deepest level of their being that their parents struggled daily to provide them with the things needed to grow up healthy and whole. Despite the financial struggles, the Davis parents were givers; tolerant, kind, and generous with their meager funds. The four Davis children became determined to establish their financial independence as soon as they were able.

Olga graduated from Theodore Roosevelt High School in January 1942 at age sixteen, a month after Pearl Harbor. Having always yearned to travel, when Olga turned seventeen, she left home for Los Angeles. For three years, she traveled around the United States, working secretarial jobs to support herself. In 1945, when Olga’s brother returned from overseas, Olga returned home to New York and enrolled at Columbia University. She worked as a waitress or at an office every day after school and on weekends to earn the money for tuition. She graduated with a Bachelor’s degree in political science in 1949. Olga found her first job out of college with Drew Pearson, the famous muckraking Washington columnist. Olga answered his fan mail, which arrived by the thousands, with tips, threats, accolades and everything in between. Although she loved the job, she desired something more fulfilling, and enrolled at the law school at George Washington University in 1951. Olga continued to work at the Pearson office at night and early in the morning, before school started.

In 1954, Olga received her law degree. In June 1954, she went to San Francisco to take the bar exam. The attraction was Judd Murray, whom she had met on a train in 1951 between New York and Washington. They had a long distance relationship, and were discussing marriage. At that time, it was very difficult for women lawyers to get a job. Even an interview was agony. Law firms often told a woman lawyer, no matter how stellar her record, that clients and judges would object to the idea of a woman lawyer. They would only hire female lawyers for typing. This even happened to Sandra Day O’Connor, who graduated second in her class at Stanford.

As it happened, Olga got the first job for which she interviewed, as a law clerk to Chief Justice Phil Gibson of the California Supreme Court. She went to work for one year, and stayed for thirty-seven. During her tenure, Olga helped to write important opinions involving civil rights, women’s rights and the environment. These opinions provided guidance to the lower courts and the bar on the interpretation of the law, and they had to be carefully crafted to assure that the language was not misconstrued. In 1964, after nine years working for Chief Justice Phil Gibson, Olga joined the staff of Justice Stanley Mosk. She loved her work.

In 1984, Olga went to Asia for the first time – to India, and, almost as an afterthought, to Nepal to trek in the Himalayas. She fell in love with the people, and especially with the children, who were the poorest kids Olga had ever seen – dressed in rags, malnourished, yet the happiest kids imaginable. As they walked along the trail together, the children told Olga and her companions that what they wanted most in the world was to go to school. Olga was approaching sixty, and in the recesses of her mind, she realized that retirement was approaching. She wanted to do something more fulfilling with her life than lunching with friends and shopping. One night, on top of a small mountain, Olga was invited into a small hut, where three children sat on the dirt floor doing their homework by candlelight. She was touched by their eagerness to get an education. Lying in her sleeping bag that night in the dark of the tent, Olga suddenly knew, out of the blue, in a lightening moment, that she had found a cause to which she wanted to devote her life. Right then, she promised herself that she would find a way to educate Nepali children. The idea took root immediately, and remained constantly in her thoughts.

Olga returned to Nepal year after year, first giving scholarships to boys from an orphanage in Kathmandu, and then gradually branching out. In 1990, she formed the Nepal Youth Foundation to organize and expand their efforts on behalf of Nepali children. In the almost twenty-five years of its existence, the foundation has impacted the lives of 45,000 impoverished children in Nepal. Its programs have educated tens of thousands of kids who would not otherwise have had the chance for an education. Olga’s foundation has built sixteen small hospitals throughout the country to tackle the serious problem of child malnutrition. In these centers, mothers come with their children, and while the child is restored to health, the mother is taught the principles of good nutrition, using only foods available easily and cheaply in her village. These hospitals have restored to blooming good health more than 13,000 children and taught their mothers how to provide them with inexpensive, health food.

The foundation has established two small children’s homes, one for boys and one for girls, where children with the worst backgrounds – beggars, homeless kids, boys living in jail without a father – are provided with the best Nepal has to offer in education, nourishment, and nurturing. Among the Nepal Youth Foundation’s most successful programs is the Indentured Daughters Program. In the Tharu community in southwest Nepal, families customarily sold their daughters for around seventy dollars to work as servants in the homes of strangers far from their villages. These girls, some as young as six or seven, passed their lives as house slaves, sleeping under the stairs, eating leftover food and being routinely beaten or sexually abused. An estimated 18- 20,000 children were the victims of this practice.

In 2000, Olga and the Nepal Youth Foundation began their campaign to eradicate it. They brought over 12,000 young girls home from their labors, placed them in school, and began a dynamic awareness campaign to turn the community against the practice. In this, the returned girls were the best allies. The foundation provided them with empowerment and advocacy training. Through a combination of awareness projects – posters, demonstrations and marches, street plays, radio programs, publicity in print and on TV, lawsuits against recalcitrant employers and political lobbying, the bonding custom has been eradicated. In 2014, the government officially declared the practice illegal and passed laws punishing employers who engage in it. To Olga’s knowledge, not a single child was bonded away last year. The Nepal Youth Foundation is engaged in an extensive program to rehabilitate the returned girls, including education, vocational training, peer counseling and microlending to allow the older girls to start their own businesses.

Olga continues her heavy involvement with the Nepal Youth Foundation as Honorary President of the Board. She spends half the year in Sausalito, raising funds for the foundation, and the other six months in Nepal overseeing foundation projects. In Olga’s words, “It’s a long way from Transylvania to Kathmandu, but it has been an amazing journey.”