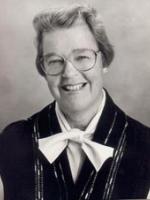 Pamela Wright Lloyd of Mill Valley has devoted much of her life to safeguarding the environment. She was a founder of the Marin Conservation Corps (MCC), the first local community conservation corps in the U.S., which provides disadvantaged youth with opportunities to learn land stewardship and develop job skills through community service. In 1972, Lloyd co-founded the Environmental Forum of Marin to inform community members about the environment. She was also instrumental in developing the nationally recognized Marin Countywide Plan, which continues to provide real protection to Marin’s natural environment twenty years later.

Lloyd was the first women President of the Marin Municipal Water District Board of Directors, where she helped guide the county through its first major drought and established policies that were later replicated in other parts of the country. In 1987, Lloyd was appointed to the San Francisco Bay Regional Water Quality Control Board, and she has since been called one of its most respected and effective members. In 1990, she was awarded the Ted Wellman Memorial Award by the Marin Conservation League for outstanding community service in protecting water resources.

Lloyd has demonstrated leadership and vision in all her undertakings. As former Marin County Supervisor Al Aramburu said of Lloyd, his former aide, “She is a woman of uncommon intelligence, dedication and integrity, serving as an exemplary role model for women of all ages.” Lloyd is highly respected for the strength of her environmental convictions, her willingness to respond to the concerns of others, her fair-mindedness and her general good nature. Her achievements will benefit Marin County, the Bay Area environment and its people for decades to come.