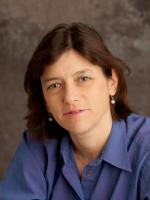 Tricia Hellman Gibbs, MD, is the co-founder — along with her husband of nearly thirty years, Richard D. Gibbs, MD — of the San Francisco Free Clinic. Established in 1993, SFFC’s mission is to provide free accessible medical treatment to those without health insurance, and to advance the field of primary care by providing educational opportunities for future medical practitioners. Back in the 1990s, Tricia and Richard closed their own thriving medical practice to open the free clinic which has provided, to date, more than 100,000 free patient visits, millions of dollars worth of medications and thousands of referrals for specialty care with no cost to the patient.

Tricia comes from a long line of philanthropists and financiers who have demonstrated their commitment to making a difference in the Bay Area and beyond, ever since their patriarch, Isaias Hellman, emigrated to California from Germany in 1859. More recently, Tricia’s father and mother, Warren and Chris Hellman, have made their mark, contributing unceasingly to the arts, education, medical research and many additional causes. After Warren Hellman passed away in 2011, Tricia and her three siblings have redoubled their efforts to carry on this legacy.

After an early interest in veterinary medicine turned to a focus on becoming an MD, Tricia attended Yale University Medical School (class of 1986), where she met her husband, fellow medical student, Richard D. Gibbs. They were married in 1984 and have five children, two girls and three boys, who are now all in their twenties. Along the way, Tricia achieved the ninety-ninth percentile in her medical boards and was awarded a number of honors, including a college Canby Scholar/Athlete Award, a Women’s Scholar/Athlete Award, a Campbell Award for highest grades in the course of medical studies, the Williams College 2001 Bicentennial Award, and 2006 UC Berkeley Public Health Heroes Award. With husband Richard, she was named 1998 Physician of the Year by the California Academy of Family Physicians. She and Richard were also named Philanthropists of the Year on National Philanthropy Day, November 5, 2010. In addition, they recently accepted the University of San Francisco’s California Prize for Service and the Common Good on behalf of the San Francisco Free Clinic. In 2013, their alma mater, Yale University, honored Tricia and Richard with the Yale-Jefferson Public Service Award for commitment to service and social responsibility. (The Jefferson Awards began in 1972 to recognize community and public service.) As they so often do, the Drs. Gibbs emphasized that they were accepting this recognition as an honor for the San Francisco Free Clinic, itself, the entire staff and all the volunteers.

Tricia has published numerous medical articles and clinic-related articles, and there have been numerous articles written about her in such publications as the San Francisco Chronicle, American Medical News and The Stanford Daily. In September 2001, Tricia’s life took yet another turn when, after the terrible events of September 11th, she decided to begin a deep personal inquiry into the nature of religion. Having been raised virtually religionless in a secular household, though her father was Jewish by heritage, Tricia began to study the Jewish and Christian Bibles and the Holy Quran. This investigation lead her to learn Hebrew and Arabic — a continuing study — and in 2011 she also published a novel entitled A New Song under the pen name Sarah Isaias. (The story brings together Muslim and Jewish characters on a thrilling adventure to find a legendary poem that will save the world.) Meanwhile, she and her father were called to the Torah as B’nai Mitzvah on August 27, 2009 at Congregation Emanu-El in San Francisco, at the synagogue her ancestors had helped found in the 1800s. As part of her continuing religious studies, Tricia also enrolled in Berkeley’s Graduate Theological Union to pursue a Masters Degree in Jewish Studies. Her thesis explored the work of Moses Maimonides, the preeminent medieval Sephardic Jewish philosopher, astronomer, Torah scholar and physician.

Future horizons for Tricia include exploring and intensifying philanthropic efforts in the Bay Area and beyond, continuing to assist uninsured patients as they transition into the new healthcare opportunities offered by the Affordable Care Act, further researching the extraordinary writings of Moses Maimonides, writing a sequel to her first novel, and enjoying the unfolding of the lives of her five children as they develop their own careers and families. She is most honored to join the group of remarkable women recognized by YWCA and the Marin Women’s Hall of Fame, in this and prior years.