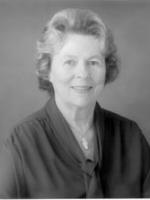 Patricia Hallinan was one of the first women to graduate from Stanford Medical School. Although she was actively discouraged from pursuing medical studies by some of her professors (who did not want female students), she successfully completed her medical program. When medical internships (other than at children’s hospitals) were routinely denied to women, Patricia Hallinan directly negotiated a general medical internship at San Francisco General Hospital. When she completed her internship, she was the first Stanford graduate in twenty years to be awarded a residency at San Francisco General. She later entered private practice as a cardiologist.

Dr. Hallinan eventually became Assistant Health Officer for Marin County. In this position she became closely acquainted with the special needs of disabled children, children with birth defects and other children with special needs. She established a program in the Department of Public Health for the protection of battered children. She was a champion for the rights of the developmentally disabled. Later, as a representative of the Agency for Infant Development, she worked with State Assembly members to write, sponsor and pass legislation designed to protect California’s children. She actively lobbied in Sacramento and made numerous television appearances on behalf of these laws and other child-related issues. She was one of the first to address the problem of fetal alcohol syndrome. Dr. Hallinan received numerous awards during her life, including the March of Dimes Meritorious Service Award.