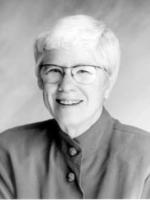 Phyllis Faber graduated with a Master’s in Microbiology from Yale University and attended San Francisco State University. She is a recognized authority in the area of environmental issues, particularly wetlands. Her work in long-term monitoring of wetlands in San Francisco Bay is providing data for a new round of marsh restoration projects. She is the author of two wetland field guides, published through her own Pickleweed Press. Under her ten-year editorship, the California Native Plant Society’s journal, Fremontia, has become the most influential native plant journal in the country. Ms. Faber combines talents in science, politics, education, environmental policy and citizen activism.

She co founded and served as chairwoman of the Marin Agricultural Land Trust (MALT) and in 1972, she was in the forefront of the fight to attain coastal zone protection for California. She served on the California Coastal Commission for eight years. She was a founding member of Marin Discoveries and the Environmental Forum of Marin in whose training program she has taught for twenty-two years. In addition to local interests, she serves on a number of statewide boards, including the Planning and Conservation League, the League for Coastal Protection and Pro Esteros.