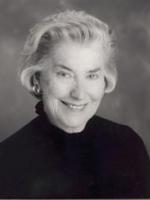 During the past forty years, Phyllis has committed herself to volunteer community service through leadership by supporting existing cultural institutions and developing new ones. She has worked to further understanding about the role that art plays in quality of life. By learning a new vocabulary to communicate with businessmen and politicians, she has been successful in advancing her culture goals. She welcomes obstacles and challenging barriers.

Among her many accomplishments is her thirty-two-year leadership of the Marin Ballet Association, where she aided in its growth and development, including the purchase of its building. She helped salvage and spearheaded the building of the Civic Center Memorial Theater and served as founding member of what was to become the Marin County Fair and Parks Commission.

A fine visual artist herself, she has designed and produced original posters for the Marin Ballet, “Dance Through Time,” and the International Dance Alliance. Her leadership and fundraising efforts have enabled the development of many cultural organizations, including the Art Works Downtown, Youth in Arts and Marin Arts Council.