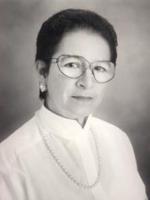 Dr. Rosario Carr-Casanova’s every move is focused on the empowerment of women and the improvement of their status. Throughout her dual careers as an accomplished psychotherapist and a professor, Dr. Carr-Casanova has demonstrated her belief in this goal. She has a deep love for education and a dream of providing opportunities for as many people as possible. As a university professor, she has achieved national acclaim as a cross-cultural and multi-racial specialist. Dr. Carr-Casanova is aware of her impact as an example to young Latinas and encourages young Chicanos to excel.

Dr. Carr-Casanova is also highly trained in public policy and works to provide better services to women of all races and to poor and needy families. She worked to establish the Marin County Minority Mental Health Services, and to have counseling services in Spanish provided though the Family Service agency. While on the Board of Directors of United Way, Dr. Carr-Casanova brought five Latino agencies in as new members. At the national level, she has been instrumental in providing birth control information in Spanish to the nation’s Hispanic population. In addition, Dr. Carr-Casanova raises funds for the Chicana/Latina Foundation, helping Hispanic women to access higher education. In 1994, she was named Citizen of the Year by the Marin Council of Agencies.

As a psychotherapist, Dr. Carr-Casanova works with groups of youth who are believed to be dangerous, and is successful in bringing out the best in the community’s most disturbed and discarded teenagers — many of whom she has seen become successful business people under her tutelage.

Dr. Carr-Casanova is truly a champion of the underdog. She is continually looking for better ways to understand, represent and serve the Hispanic people. She advocates that people obey the law, work hard and be of service to their families and to the community. She stands as a powerful model, especially for women, of focused, determined action to uphold human rights and to ensure dignity for all.