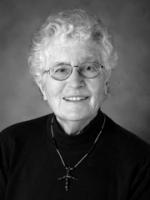 Sister Marion is committed to serving others by raising social consciousness, primarily through teaching, administration and example. In 1949, she began her vocation as a Roman Catholic nun and taught third-graders at St. Raphael Elementary School in San Rafael. For fifty years, Sister Marion held eleven different positions in education in Marin, Vallejo, Monterey, Stockton, San Francisco, Napa and Santa Rosa, including serving as Assistant Superintendent of Schools.

Shifting her focus from education to commitment and social activism, she holds the title of “Promoter of Peace, Justice and the Care of Creation,” and works tirelessly with others to ban capital punishment, protect the environment, provide affordable housing, improve education and to further other social justice issues.

In 2003, Sister Marion led the Dominican Sisters of San Rafael to take a stance against pre-emptive strikes in Iraq, and she continues to work and pray for peace in all global conflicts. She is against the death penalty, and along with members of the community, has held a vigil at San Quentin at each execution. She has collaborated with others to address issues relating to human trafficking, worked to create safe houses or to provide additional support services, and protested during the ICE raids in 2007.

Sister Marion has served as Secretary, Vice-President and President with the Marin Interfaith Council to address not only the death penalty, but also affordable housing issues and immigration injustices. At MIC, Sister Marion works with Protestant Christians, Jewish, Buddhist, Muslim, Sufi and many other religious leaders, for the purpose of justice, equity, excellence, equal opportunity and respect for all.

She is also an athlete and began running at forty-eight years old. Her fellow Sisters have become her cheering squad. Sister Marion experienced her own human limitations while running, which helped to deepen her compassion, taking her to new heights in more than the running world, inspiring her to reach out beyond education to a role of social activism.

Sister Marion ran competitively for fifteen years and was the oldest woman ever to qualify for the Olympic trials in long-distance running in 1983. This event earned her a sponsorship by Nike and a place in the Road Runners Club of the American Hall of Fame.

As Sister Marion approaches her eightieth birthday, she continues to model leadership that is founded upon compassion, humor, perseverance and social justice. She has received the Marin County Human Rights Commission’s Martin Luther King, Jr. Humanitarian Award and Dominican University’s Athletic Hall of Fame recognition. Marin Women’s Hall of Fame joyfully welcomes her for her humanitarian efforts, leadership for social justice and dedication to education on so many levels.