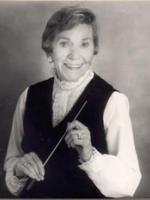 Ms. Baker created a legacy of trained singers throughout the Bay Area and the country. Some of the original members of her Chorales and Children’s Chorus continued to sing with her, as did several of their children, throughout her life. Others continued to bring musical talents they developed under her tutelage to choruses and audiences throughout the world.

The world of conducting is one that has been primarily populated by men. Ms. Baker broke through the musical glass ceiling with her perseverance, energy and attention to excellence. Ms. Baker won respect from many, including Arthur Fiedler, Sandor Salgo, Peter Toboris (who invited Winfred to conduct in Carnegie Hall) and Gary Sheldon, conductor of the Marin Symphony. In 1976, she became the sixth woman invited to join the London-based Incorporated Society of Musicians in the Conductor’s Section, sharing this honor with such notables as Benjamin Britten and George Solti. Her impressive musical skills dissolved barriers, paving the way for other women to perform and conduct in the great cathedrals and music halls of the world.

In addition to conducting her choruses, Ms. Baker was a Professor Emeritus at Dominican College and taught piano classes on campus. She was an active member of Marin Music Chest, passionately advocating for a return to music education in schools and colleges. She received numerous awards for her musical contributions, including the “Distinguished Women Award,” conferred by Dominican College, the San Francisco Arts Commission’s “Award of Honor,” the Women Musicians of San Francisco’s “Musician of the Year” Award and the “Music Educator of the Year” Award, elected by the Marin Symphony, Marin Opera Company, Marin Ballet Company and Youth in Arts.

Winifred Baker’s passion for musical beauty and her commitment to excellence inspired her listeners, her students and her colleagues for over forty years. She was a giant among musicians and a beacon for those who aspire to make a mark, whatever their chosen profession.